This is a tribute to my great uncle, the legendary jazz drummer, Dave Tough. 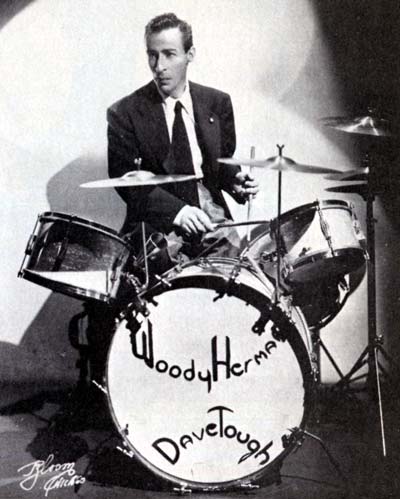 Dave Tough was born April 26, 1907 Oak Park, Illinois and died December 9, 1948 in Newark, New Jersey. From an early age he was passionate about drumming. While in high school, Tough became a member of the Austin High School Gang. The Austin High Gang was an ever evolving group that formulated the Chicago style of jazz which was very popular in the 1920s, initially comprised of Bud Freeman, Jimmy and Dick McPartland, Frank Teschmaker, Jim Lanigan, and Dave North. From early on Tough was an ensemble player, who preferred to solidify a groove rather than transform or change it. In doing so, Tough relied on his great sense of musical quality.

In 1920’s, Tough traveled throughout Europe and spent time in New York City making records with contemporaries like Eddie Condon, Red Nicholas and others. In 1932 Tough became ill due to excessive drinking and smoking. As a result he took a temporary leave from jazz returning in 1935. Prior to his leaving Tough played primarily with small groups, but after his return Tough began performing with large big bands. His big band feats include collaboration with Tommy Dorsey, Red Norvo, Bunny Berigan, as well as Benny Goodman. His employers were the best of the best of white big bands from the swing era. Tough’s constant relocation was attributed to his consistant search for musical perfection.

In the summer of 1942, Tough enlisted in the US Navy but was discharged in February of 1944 on medical grounds. After his discharge, Tough joined Woody Herman’s Thundering Herd. Tough considered bebop to be a style that did not suit him musically and sought to develop a career as a songwriter. A combination of the changing jazz scene and his uncontrollable drinking accelerated his physical and mental deterioration. Tough’s life came to an end on December 9, 1948 in Newark. As he was walking home in the late afternoon, Tough slipped and fell fracturing his scull. He died the next morning. Tough’s body lay in a Newark morgue for three days before his wife identified and claimed his body.

Throughout his illustrious career Dave Tough performed with the following people: 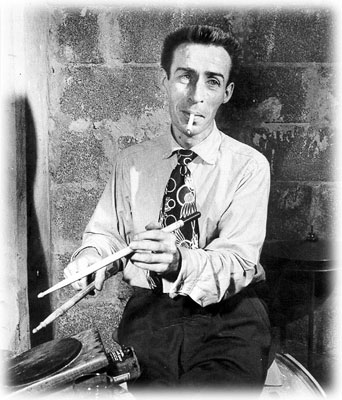 Dave Tough practicing between sets in the basement of
Eddie Condon’s club in New York City, circa 1946.

During his short and troubled life, Dave Tough showed himself to be a masterful drummer, comfortable in a wide range of settings. He consistently displayed musical, technical and intellectual gifts, that might well have taken him to the top of any artistic pursuit and served him for a generous lifetime. At times, he seemed to have the ambition for this; but he also had disturbing flaws that both circumscribed his career and foreshortened his life.

He was born, David Jarvis Tough, on 26 April 1907, in Oak Park, Illinois. He first played drums while a small child and was still at school in Chicago when he became a member of the Austin High School Gang. This was a loose gathering of white tyro jazzmen who were fascinated with and deeply influenced by the black jazz musicians whose playing set alight the clubs and speakeasies of 1920s Chicago. The Gang formulated what became known as Chicago style jazz and Dave, who early mastered the art of playing subtle and infectiously swinging drums, was a significant member of the group. In that same decade, he visited Europe and also spent time in New York City where he made records under the nominal leadership of other members of the Chicago school, notably Eddie Condon and Red Nichols.

He began the 1930s inauspiciously, spending many months inactive through illness, a portent of the future. Tiny and frail, he was repeatedly struck by illnesses that might have left more robust individuals unscathed; and he gave himself no help by drinking heavily. By 1935, however, he was ready to make a mark in a different area of jazz. Until now, the bulk of his work had been in small groups, but the big bands that would dominate the forthcoming swing era were now on the rise. He played first with Tommy Dorsey, then moved swiftly and often fleetingly through many bands: Red Norvo, Bunny Berigan, Benny Goodman, back to Tommy Dorsey, then Jimmy Dorsey, Bud Freeman, Jack Teagarden, Artie Shaw, and others, including depping with Woody Herman.

There were several reasons for his restlessness. Dave insisted on musical perfection, a characteristic shared by some of those leaders for whom he played, but ignored by others. He had an intense dislike for the characterless music demanded by the realities of commercial success that were a sometimes onerous feature of life in the swing era. And there was his own occasionally unstable personality, a characteristic aggravated by excessive drinking. In his private life, he flouted the racial taboos of the time by marrying a black dancer. He also found himself often at odds with former musical associates, and sought to establish an alternative career as a writer. He was briefly inducted into the military during World War 2, playing for a short while in the US Navy band directed by Artie Shaw, but was soon discharged on medical grounds.

It was shortly after his discharge that Dave made his greatest impact on the jazz world when he joined Woody Herman. As the records of Herman’s First Herd were played around the world, fans of big band jazz became aware that for all his physical frailty, tiny Dave Tough was a powerful giant among drummers. Yet, despite his undoubted playing skills, Dave had serious doubts about his suitability for bop. His drinking habit had by now became uncontrollable. Observers at the time remarked upon the combination of his discomfort with his role in the changing jazz scene and a detrioration in his physical and mental state, and how it led inexorably to fits. Sometimes, and deeply disturbing to fellow musicians and audiences alike, these fits occurred on the bandstand.

Many of the people who knew him, did their best to help him; not just musician friends but also the writer Leonard Feather and impresario John Hammond Jnr. But Dave would not be helped; portents of disaster had shadowed his entire professional life, and finally they came to pass. Exactly what happened one winter night can never be known. He appears to have fallen in the street while walking home from a gig. Maybe he had another fit; perhaps he was drunk; or he might simply have slipped or stumbled in the dark. Whatever the cause, he fell, fractured his skull, and died from the injury on 9 December 1948 in Newark, New Jersey. His body lay unrecognized in the morgue for three days.

Whether playing in the small Chicago-style groups of which he was a charter member, or in any of the big bands to which he brought uncommon fluidity, he consistently demonstrated his subtle talents. It was with Woody Herman, however, that Dave Tough reached the apogee of his brief but shining career. In that band he exceeded even his own high standards, urging along one of the finest of the period’s jazz orchestras with sizzling enthusiasm, flair and irresistible swing that was rarely equalled and almost never surpassed.